YORKER AS GOOD AS EVER 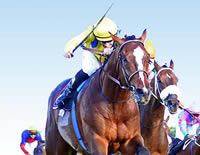 VARSFONTEIN-bred Yorker (Jet Master) returned to action following an absence of 805 days and showed he had lost none of his ability.
Making his English debut for the William Haggas stable, the now seven-year-old contested the Gr.3 Strensall Stakes at York on August 21. Last as they turned for home, he rallied strongly up the inside rail to finish second, a length and a half behind Godolphin’s Scottish.
The country’s Champion Older Horse had not raced since finishing third behind King Of Pain in the 2014 Gr.1 Rising Gold Challenge at Clairwood.
Bred by Carl and Amanda de Vos out of the Al Mufti mare Little Indian, the big bay holds an entry in the Gr1 QIPCO Champion Stakes.
Hats off to the connections for persevering when many would have called it a day!